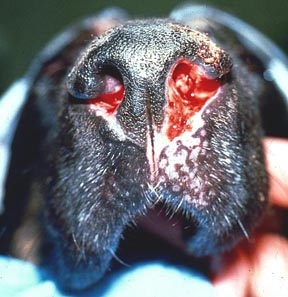 Transmission or Cause: The causative agent of the disease is Blastomyces dermatidis, a fungus. Most cases of infection occur by inhalation of the infective spores present in the environment. The organism can then disseminate or spread to other tissues such as eyes, skin, bone, lymph nodes and other tissues. At body temperature, the fungus exists as a single-celled yeast, while at environmental temperature it exists as the infectious mycelial form. Animals infected with the disease can not pass it on to others, unless there is drainage from skin lesions.

Affected Animals: Dogs, humans, cats, horses, and occasionally other animals may be affected. Most dogs with the infection are between one and five years of age. Males have a higher risk than females, and may be less responsive to treatment. Immunosuppressed animals are more at risk; animals that become infected may have an underlying immune-system defect, or may be on immunosuppressive medications.

Overview: Blastomycosis is an infection caused by the fungal organism Blastomyces dermatidis. The disease usually results in respiratory infection; however, the organism can cause disease in many body tissues including the eyes, skin, reproductive tract, and bones. Blastomycosis is a serious disease that can be fatal.

Blastomyces dermatidis is found in the environment predominantly in the Missouri, Ohio, Tennessee, and Mississippi river valleys. Although all animals in these regions are exposed to the organism, only some animals will develop infections. A compromised immune system is the primary risk factor.

Symptoms depend upon the tissues infected by the organism. Treatment requires the use of antifungal medications, often for several weeks to months. In some instances, a cure is not possible and death may result. However, constant medication may keep the disease under control.

Description: Blastomycosis is a severe systemic infection caused by the fungal organism Blastomyces dermatidis. The organism grows in the soil in specific regions of the country, including the Missouri, Ohio, Tennessee, and Mississippi River valleys. Dogs and humans are most at risk for infection; however, cats, horses, and other animals are occasionally affected.

Because many tissues can be infected by the organism, the signs of the disease will vary. Signs such as difficulty breathing, exercise intolerance, weight loss, and coughing will be seen when pneumonia, a common manifestation of respiratory infection, is present. With bone infections, lameness may be the only sign. A third of the cases involve the eyes, resulting in pain, redness, glaucoma, retinal detachment, and blindness. In addition, about one-fourth of affected animals will have skin disease that may manifest as nodular areas or draining wounds. The prostate and testes can also be affected. Prostatic involvement may result in abdominal pain, a stiff gait, and difficulty urinating. Testicular infections may result in swelling, pain, and sterility.

Systemic fungal infections are always serious, and can be difficult to treat. Many times affected animals are immunocompromised, or have weakened immune systems, making the disease harder to eradicate. If untreated, most infections are eventually fatal.

Diagnosis: A presumptive diagnosis can be made based on the animal's clinical signs, history, geographical region of the country, and serologic tests. A CBC, or complete blood count, and chemistry panel are usually performed. Many animals will have an elevated white blood cell count, and elevated calcium levels are sometimes seen. Because respiratory disease is the most common manifestation of infection, chest x-rays are usually taken. X-rays of the abdomen, limbs, or other parts of the body may be indicated if the animal is showing signs in these areas.

A definitive diagnosis is made by identification of the Blastomyces dermatidis organism through biopsy, fine-needle aspiration, or culture. Occasionally, imaging tests, such as a CT scan or nuclear scintigraphy, may be performed to better identify which tissues are infected and to monitor treatment. This equipment is typically available only at universities or large referral institutions.

Prognosis: The prognosis for treatment is guarded. Animals with severe respiratory or central nervous system signs have the poorest prognoses. With severe disease, animals often succumb during the first week of treatment, due to the inflammatory response that occurs as the organism is killed. If the animal does respond to treatment, the prognosis is more favorable; however, recurrence is seen in about 20 percent of cases, generally occurring within the first six months. A full course of therapy must be reinitiated in cases of relapse. Rarely, animals require lifelong treatment to control the disease.

Treatment: Antifungal drugs including ketoconazole, itraconazole, fluconazole, and amphotericin B are the mainstay of treatment. Amphotericin B was one of the first drugs found to be effective in the treatment of blastomycosis. It can cause kidney damage, and requires intravenous administration.