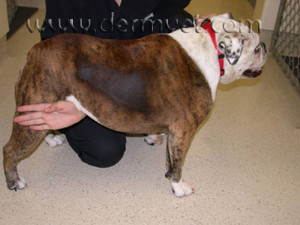 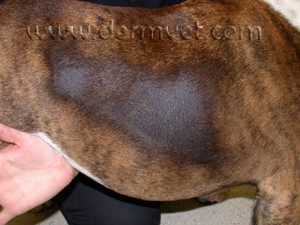 Transmission or Cause: An incompletely understood disorder which causes seasonally recurrent hair loss on the flanks and may involve photoperiod changes in melatonin and prolactin hormone production which then affects hair follicles.

Clinical Signs: Non-inflammatory, non-pruritic hair loss on the flanks. Exposed skin may become darkened. Hair loss usually affects both sides, but can affect one side. Hair loss often occurs between November and March and spontaneously regrows several months later, but in some dogs the amount and duration of hair loss increases with repeated episodes and can become permanent. No systemic signs of disease are seen.

Diagnosis: Clinical signs and breed are suggestive, but other causes of patchy

hair loss include bacterial demodex, or ringworm infection, or hormonal diseases such as hypothyroidism and Cushing's disease. These diseases should be ruled out by appropriate testing. Skin biopsy of affected areas shows dysplastic (abnormally shaped) hair follicles which are filled with keratin.

Treatment: Melatonin can be helpful to induce hair growth in some dogs and is given daily for two or three months until complete hair growth occurs. Restarting melatonin yearly four to six weeks prior to anticipated onset of hair loss may prevent recurrence.

Prognosis: The prognosis for hair growth is unpredictable. Hair growth can be incomplete and new hairs may be different in color and texture. However, this is a cosmetic disorder which does not affect the dog's quality of life.