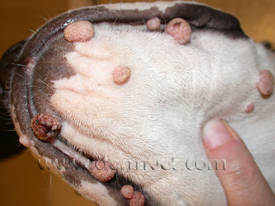 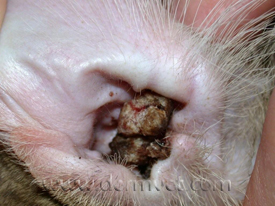 Transmission or cause:  Majority of papillomas are of viral origin

Affected animals: Papillomas are common in the dog with several different syndromes that are recognized.  Papillomas can also occur in cats, although much less frequently than dogs. 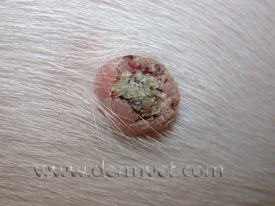 lip as well as the nose, eyelids and even the eye.  These lesions usually appear as white to gray, cauliflower-like masses.

Cutaneous papilloms can occur in older dogs, most commonly in male dogs, Cocker spaniels and Kerry blue terriers.  These can occur as single or multiple masses, usually on the head, eyelids and feet.

Cutaneous inverted papillomas are most often seen in young dogs between 8 months to 3 years of age.  These lesions are usually on the abdomen and groin and are small, raised masses with a central pore opening to the skin.

Multiple pigmented plaques are most often seen in miniature Schnauzers and Pugs.  These usually begin at 2 to 4 years of age and are mostly found on the abdomen and groin areas.  These appear as pigmented, relatively flat lesions.  In miniature Schnauzers and Pugs, this form appears to be inherited and some lesions can undergo cancerous transformation.

Multiple papillomas can occur on the footpads of adult dogs and appear as hornlike growth.  It is unknown if these papillomas are are caused by viruses. 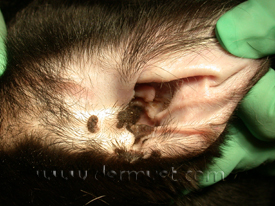 Cat:
Oral papillomas can occur in cats between 6 months to 9 years of age and occur as multiple small, light pink, slightly raised masses with the underside of the tongue most affected.

Multiple viral papilloms have been reported in middle-aged to old cats.  These lesions can occur anywhere on the body, but mostly involve the head, neck, along the topline of the back, the abdomen and lower legs.  These lesions are often hyperpigmented (black) lesions that can form into plaques.  These lesions have occasionally been found to be precursors to cancerous lesions (squamous cell carcinoma) and resembles a similar disease in humans called Bowen’s disease).

Diagnosis:  Diagnosis is often based on the clinical appearance, location of the lesion, 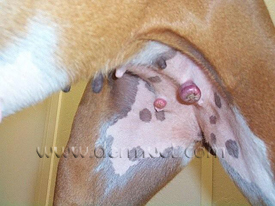 and age of the affected animal.  Definitive diagnosis is best made by performing biopsies with histopathology in order to rule out other types of nodules or cancers.  Often the presence of a virus can be detected by routine histopathology.

Prognosis:  Prognosis for young dogs is very good as lesions often regress.  In older animals, or in miniature Schnauzers or Pugs, prognosis is guarded if the papilloma transforms to cancer.

Treatment:  There are various treatment options for papillomas, often depending on the type present.  Options include surgical excision of the papillomas, cryosurgery (freezing), and laser surgery.  Oral papillomas in dogs often regress on their own within 3-4 months.  Vaccines are available and shown to be helpful.  Some reports have shown that interferon injections can be beneficial.  Recently, a topical cream, imiquimod, has been found to be successful in the treatment of papillomas.  This cream has also shown promise in the treatment of squamous cell carcinoma in situ (Bowen’s like disease—see above) in cats.  The type of treatment is best determined by your veterinarian or veterinary dermatologist.