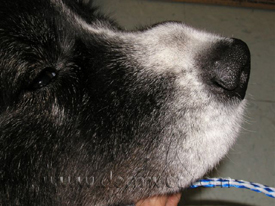 Transmission or Cause: The causative organism is Coccidioides immitis, a fungus which lives in the soil of the desert in the Southwestern United States, Mexico, Central America and parts of South America. The fungal organisms are inhaled and a lung infection is established which may spread to lymph nodes, eyes, skin, bones, or other organs. Although all animals and people in endemic areas are exposed to the fungus, only a few will actually develop infections and show symptoms.

Affected Animals: Dogs of any age, breed, or gender can be affected by Valley Fever, but it is most common in young, medium to large breed, outdoor dogs. It is rare in cats. 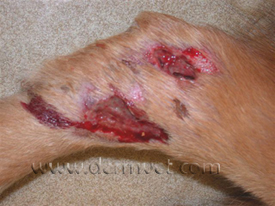 Diagnosis: Diagnosis of Valley Fever is by clinical signs, x-rays of chest and/or affected bones, and specific blood testing for antibiotics against C. immitis, the causative fungus. Biopsis of skin lesions show pyogranulomatous inflammation but fungal organisms may or may not be found.

Prognosis: The prognosis varies with severity and chronicity of disease. Animals with bone and neurologic involvement are more difficult to cure. Relapses are common, especially if treatment is not continued long enough, but with aggressive long term therapy, most animals can be effectively treated.

Prevention: Because the fungal organisms are ubiquitous in the Sonoran Desert life zones, prevention is not possible, however restriction of a dog's access to areas of disturbed earth such as construction zones may be helpful.